Snaps and snippets, by Sophie Perri 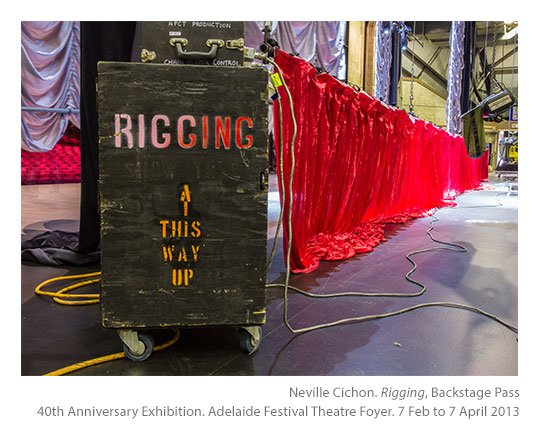 This was taken during during preparations for the 2011 Adelaide Cabaret Festival. If you look closely at the left hand section of stage you will just see some ghostly feet and they are responsible for moving the silver drapes during the long exposure.
The black box is a mobile tool cabinet containing specialist components required for rigging. The This Way Up text is not the same as what appears on the back page of the catalogue. That was sourced from a different cabinet. 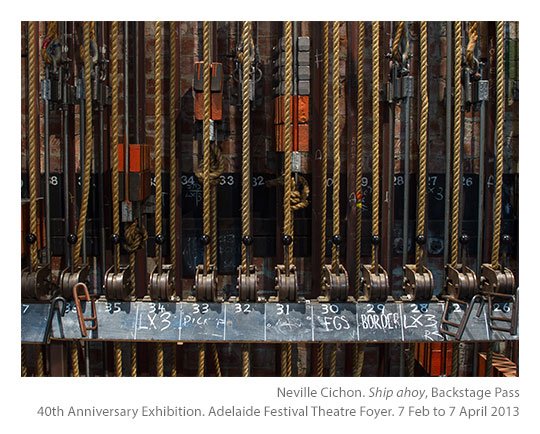 Along the eastern wall of the wings in Her Majesty’s Theatre you can’t miss this single-purchased counter-weighted hemp rope flying system that spans more than 10 metres wide. This is just a small portion of the 83 ropes.
The chalk writing is customised to each performance to record which curtain, prop or lighting bar it controls 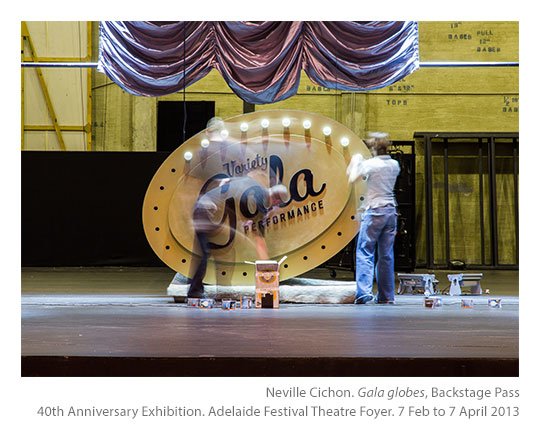 Preparations for the 2011 Adelaide Cabaret Festival on the Festival Theatre stage. The hand writing on the white tape wrapped around the beer carton reads GALA SIGN GLOBES and FRAGILE!!.
The globes are fitted and tested before the sign is flown into place above the stage. 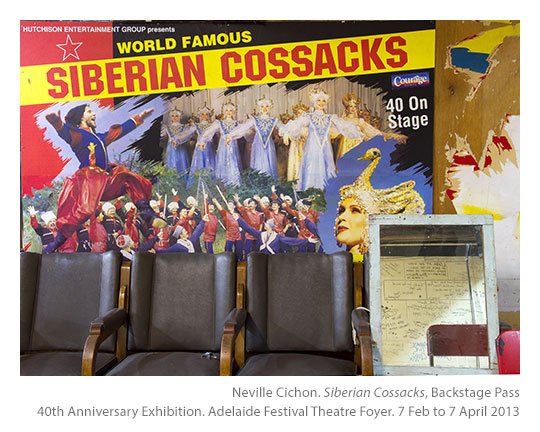 This poster dates back to a tour to Her Majesty’s Theatre in 2003. It is located in the greenroom which is directly below the stage and must serve as a reminder of the thunderous noise  that would have filled the greenroom as the cast of 40 stomped on the wooden stage floor.
You can see a glimpse of the wall of autographs reflected in the mirror. One section reads Look at me when I’m back on the wall! Fond memories of three decades-Barry Humphries Nov 20 ’93. An OZ Asia lantern casually placed out of the way in front of the Silver Jubilee Organ in the wings of the Festival Theatre.
I queried some of the staff about how the giant rabbit was positioned and no one had realised that it appeared to be ready to tinkle the ivories. The Silver Jubilee (hovering pipe) Organ (c1979) is stored in the wings of the Festival Theatre. 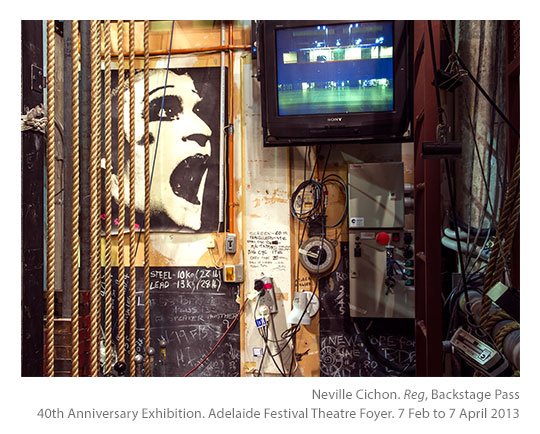 This poster of Reg Livermore may well have been positioned here above the Festival Theatre stage since the late 70’s. It appears as though any text that may have been on the poster previously has been trimmed off. At some point vampire fangs were drawn on with chalk.

After this image was seen by the Performing Arts Collection staff it has been rescued and added to the collection. Look out for this poster again in June 2013 when the Reg Livermore: Souvenirs from the stage exhibition opens. 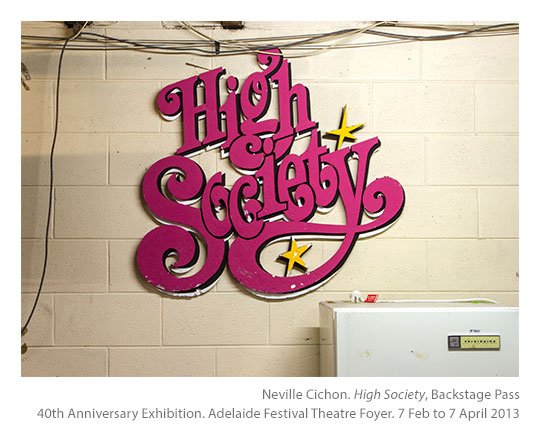 A souvenir from the 1993 production of High Society hanging in the Green Room at Her Majesty’s Theatre. At the top of the frame there is a glimpse of the rafters that support the stage.
The label on the refrigerator, Frigidaire – Product of General Motors Holden’s adds to the old world charm of the space and has probably kept food and drink cold for countless visiting companies and local crew for decades. 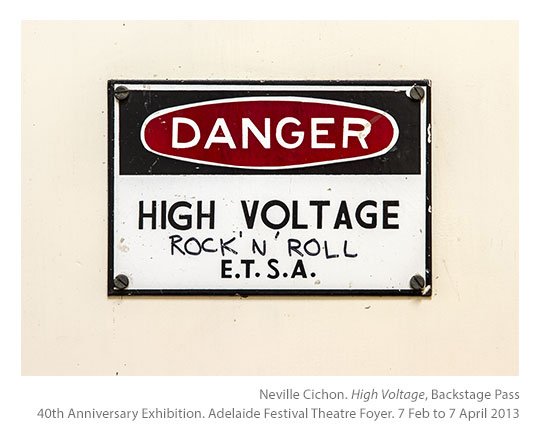 ‘High Voltage Rock ‘n’ Roll’ is a line from the chorus of an ACDC song released in the mid 1970’s. This sign is located in a service corridor near the Festival Theatre. We can assume that the Rock ‘n’ Roll text has been added in recent times, but how old is the original sign?
At close inspection the red has various shades and the letters are irregular in shape and spacing. This is in the loading dock at Her Majesty’s Theatre. The sign featuring Jon English is from the Mikado (c1995) and the Barry Humphries sign for Back to My Roots and Other Suckers is from a tour in 2003.Kelvin had just mopped the stage at Her Maj’ and you can see the damp patch on the floor.
Kelvin has worked at Her Majesty’s for decades and the mops, brooms, vacuum cleaner, carpet sweeper and plunger are a mere fraction of the tools of his trade. The area was kindly lit by the north facing loading dock door (as seen in another photograph in this series, Take notice. Somewhere during the late 90’s the framed picture of Doris Day was an opening night gift to the Festival Theatre’s head sound technician.It was an acknowledgement of her distinctive choice of music for sound checks before each show.

Over the years various religious icons were gifted to the technicians, a battery operated lotus, a clapping Jesus, a plaster Buddah and the sacred cow.

All icons to ward against evils in audio–from radio frequency interference to blown up speakers. Doris and her icon friends would be positioned around the sound control room  in their most potent position.

The framed Doris Day picture, known as Doris S/LARES*, a Russian take on the Sputnik, is a homage to the dated technology used in the venue.

For the technically curious out there, note that the text in the speech
bubble is pure nonsense.

*Developed in the 80’s the Lexicon Acoustic Reinforcement and Enhancement System (LARES) was introduced to the Festival Theatre for the Ring Cycle and proved to be a controversial new technology creating a reverberant space where the architectural materials couldn’t. Take notice. In the loading dock of Her Majesty’s Theatre these signs are mostly about the door. Do not obstruct it. Please shut it. Unlock it. Keep it closed and just plain keep it 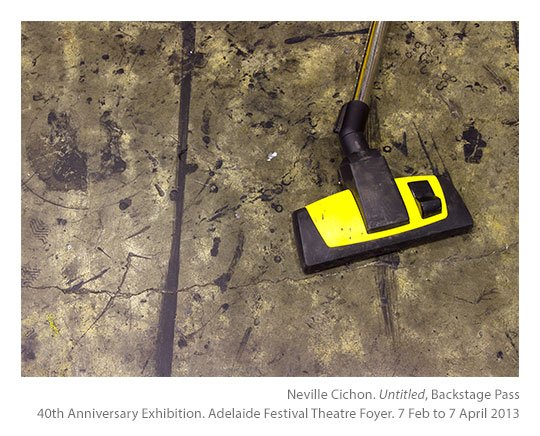 Layer upon layer. This floor in the wings of the Festival Theatre stage is also a workshop for painting sets and props. 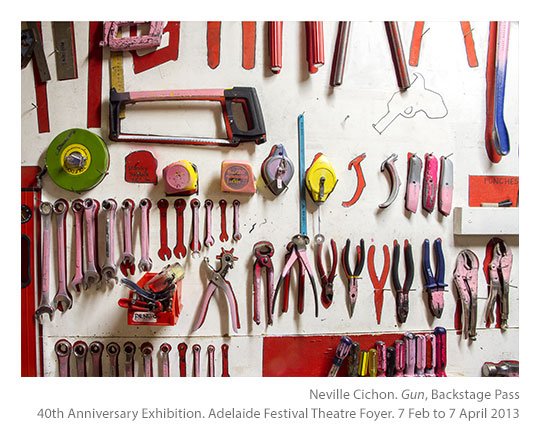 In the tool cage in the northern wing of the Festival Theatre the tools are marked with pink paint to distinguish between the tools located in the Dunstan Playhouse that are painted blue. 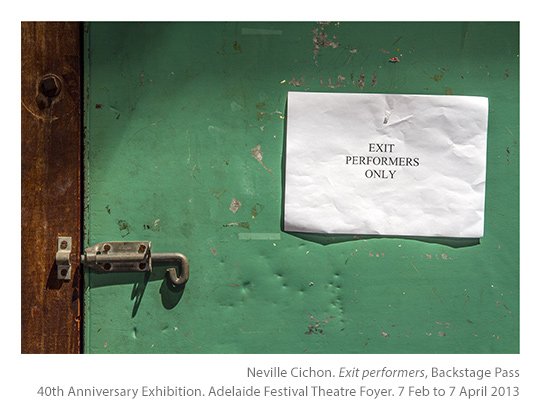 This door is in the western wing of Her Majesty’s Theatre and leads to the auditorium. This temporary sign appears as though it may have been recycled from previous performances. The missing paint and marks left by tape suggest that there is a regular need to place a sign here. 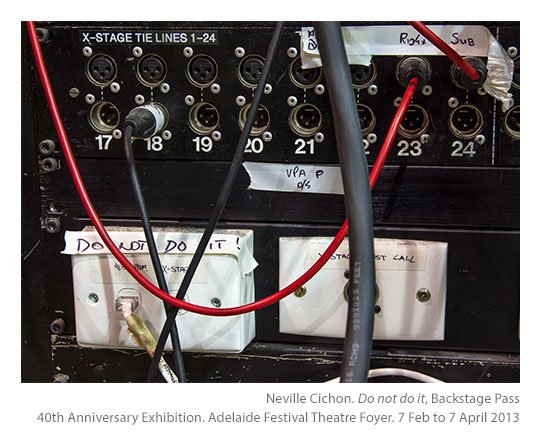 Located on the edge of the Festival Theatre, stage this important message is seen attached to a communication patch point.